I Needed a Hero: The Baby Room 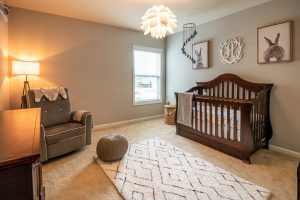 Baby monitors are supposed to be easy, but what do you do when your husband brings home the most complicated system you have ever seen? This happened to me just two months away from my due date and I was beginning to panic.

I am about to be a mom, with only two months left in my pregnancy.  I have been setting up my nursery and I am almost finished. We have the crib, changing table, basically all of the essentials, except for the baby monitor set up. My husband, being the over-excited guy that he is, wanted to get the best in the business, but he ended up ordering something so complex that we did not know how to install it.

The baby monitor was feature-packed. It had two different cameras that mount to the wall and one for the wall of the crib. It was all supposed to connect to the television, giving us a constant, live stream of the entire nursery. This system also came with a nanny cam in a bear that we decided to just keep in the nursery until we needed it.

We read the instructions and attempted to get it up and running twice, but all we managed to do is damage our walls. Every time we attempted to mount these cameras, we would make new holes and at this point, our new paint job was all messed up. One time we got it to mount correctly, but we messed up the wiring. I finally decided to call a handyman to just come and do the installation, but he had quoted us almost as much as we had paid for the system. I could not afford that, so I was ready to just return the system and get something simpler that did not require so much hardware.

Later that week, I was chatting with some girlfriends about this issue we were having with the baby monitors and how it has been so difficult to install something that was supposed to be easy. My friend suggested I check out AV HERO and get a hero to help me. I had no idea what she was talking about. She explained to me that it was a company that had “heroes” in most cities that could either try to help over the phone or come to your place and help you. I told her that I had a small budget, but she said that AV HERO just charges by the hour. It all sounded too good to be true, but I had to check for myself.

I hopped on to the site, explained my issue and was matched with a hero in minutes. After I mentioned that my husband or I would not be able to install the system, my hero offered to come out to my house and install it and make sure it live-streamed to my living room television. My husband and I were on board.

The next day, the hero came to our house and did the whole job for us, and it didn’t break the bank. We could not figure out the wiring ourselves and our hero solved the problem within a few hours. It was exactly what we needed to get the stress off of my back especially. AVHERO really saved the day!