The Pros and Cons of Freelance Work 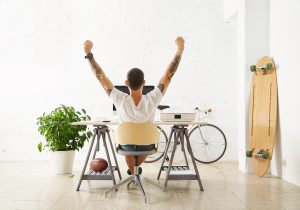 If you’re thinking to yourself that now is a good time to start freelancing — or even just picking up a side hustle — you’re not alone.

According to some estimates, there were 59 million freelancers in the United States last year. And, that number continues to rise. Some projections show the population of the gig economy swelling to roughly 90 million by 2028.

With several enabling factors and all the benefits, it’s not surprising to see the growth of this population.

Interested in freelancing for AV HERO? Start the process today.

A study by Upwork reported that skilled freelancers earned more per hour than 70% of all workers in the US — and the future looks good. With technology as a key factor for supporting the gig economy, 91% of freelancers in the report say the best days are yet ahead.

But why? What’s so great about freelancing anyway?

There are several pros, and some cons, that prospective freelancers should be aware of. Let’s break them down.

The Pros of Freelancing: Flexibility, Possibilities and Unlimited Earning Potential

The decision to start freelancing comes in many different forms. Sometimes it’s a necessity, but more often it’s just to make extra cash.

Either way, there are numerous advantages to becoming your own boss. In fact, more than half of freelancers in the Upwork study say “no amount of money” would bring them back to a traditional job.

Break Free from the 9-to-5, Work When You Want

One of the leading reasons why so many turn to freelancing is because of the flexibility it affords. For some, the traditional work day isn’t ideal. Or, it’s simply impossible.

With freelance work, the schedule looks different and that’s often a good thing for those who choose this career path. What’s more, if you complete the work early, there’s no reason to hang around. Pack up, log off, spend your time how you want.

With freelance work, you set your sights on the projects you want to pursue — unlike a more traditional job where the choice is… nonexistent.

You decide which skills to sharpen when, which projects to take, which clients to work with, and so on. That freedom to explore new pathways opens up doors that a more static work environment doesn’t always allow for.

In theory, you can earn as much as you’re willing to work.

Typically, you don’t have a set salary or an hourly rate you’re restricted to. Some reports even show 60% of freelancers making more than they did at their traditional jobs.

Some freelancers tend to make more on average than their 9-to-5 counterparts, likely in part because they put in the time and energy. For those who want projects, who are ambitious, eager to learn and grow, the possibilities are limited only by your need to eat and sleep — unless you become a really great multitasker.

The Cons of Freelancing: Taxes, Benefits, and Peaks and Valleys

While freelancing can be a gateway toward a bright future with plenty of possibilities, it’s not all rosy — especially come tax time.

It’s important to know what you’re getting into as a freelancer. The more you equip yourself with knowledge and understand how to navigate this career path, the better your chances are of avoiding mistakes and challenges.

Freelancers pay self-employment taxes and the tax rate is 15.3%, according to IRS.gov. See the nitty gritty on that here.

The most important consideration here is that with freelancing, there is a new set of rules to play by. It’s best to familiarize yourself with laws, regulations, and resources to better understand how this career path may affect your income taxes. (It would be wise to find a trusted financial professional to help.)

The ‘Benefits’ Aren’t the Same

Access to benefits ranks as a leading challenge for freelancers.

As an employee of a company that offers a 401K, health care, dental, and more, you would enjoy these benefits along with full-time work.

Much like taxes, this looks different as a freelancer.

You are responsible for finding insurance coverage, whether that’s through a government program or private company, and you must remain accountable for retirement savings as well. The inclusion of these types of benefits make a traditional job appealing, namely as it relates to structure and cost.

Not knowing when or how much you’ll earn adds stress to the job. It’s likely one of the first things prospective freelancers think of as they consider the journey.

It’s often that freelancers go through a series of peaks and valleys throughout the year. At times, work piles up and money comes in generously. At other times, leads grow cold.

Are You Ready? Take Control of Your Destiny, Become an AV HERO

Ever heard this line?:

“No job is perfect…”

Freelancing has its downsides. You’ll have days.

But the upsides are often well worth it — and the data supports that notion.

Becoming your own boss, taking ownership over your future, and charting a course ahead can empower you to learn new skills, take on new responsibilities and uncover opportunities that wouldn’t present themselves otherwise.

For those in the audiovisual industry, now is an excellent time to consider this journey.

AV expertise is in greater demand than ever before, and AV HERO provides you the platform to connect directly to those who need your help. You set the schedule. You decide which jobs to take. AV HERO puts you in control – because you’re the one with the power to Save the Day.

Why become an AV HERO?

“The whole process was very simple and seamless” says Elias, a fellow AV HERO, of the sign-up process. “I really appreciate how much thought was put into this and how gated and secure every step was throughout the whole process. Thank you for bringing this innovative solution into our field and I’m proud to be part of AV HERO.”

Start the process to become an AV HERO today

Another great article on the “Freelance Revolution” – https://www.toptal.com/insights/rise-of-remote/contingent-workforce